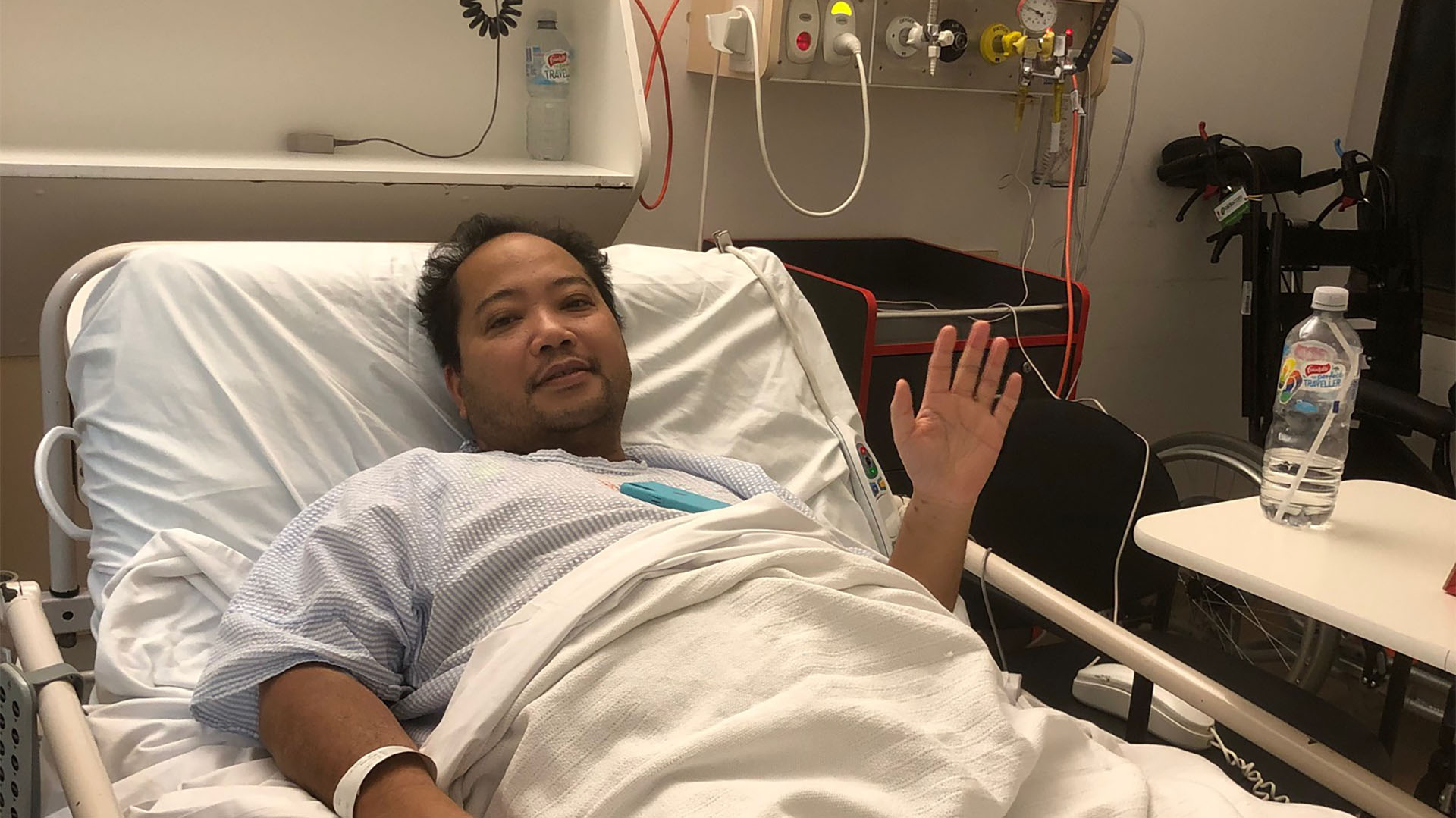 In March 2020, Michael Rojales, together with four other pastors from his church returned from a ministry trip to South Africa.

A few days after they returned, three of the five felt unwell. With talk of the worrying new virus, COVID-19, filling the news, they went to check that their headaches and fatigue weren’t related to it. Unfortunately, their tests were positive.

Michael, also unwell with a lingering cough, decided he would get tested just to be sure he didn’t have it. He was shocked when he also tested positive—and quickly became sick enough to go to hospital.

With very little knowledge and no effective treatment for the virus, medical staff had the difficult task of trying to manage Michael’s symptoms, which were rapidly deteriorating.

“I believe that I was the first person with COVID in Victoria to be admitted to ICU,” Michael said.

At only 46 years old, he had blood clots and renal failure and his lungs were in a bad way. To keep him alive, the doctors intubated him, and put him in an induced coma.

They told her. “Be prepared for the worst. You should prepare to say goodbye to him.”

Not long after Michael went to hospital, his wife Rachel also fell ill with COVID. Her symptoms were far less severe than her husband’s, but she still had to be in hospital for a week.

While Rachel was still unwell, the doctors came to see her. “Your husband is not getting better,” they told her. “Be prepared for the worst. You should prepare to say goodbye to him.”

Rachel’s first thought was to call out in prayer. “Lord, we need you,” she said. “Please help.” She felt the Lord leading her to let people know what was happening and began texting their family and friends. That very day, Michael’s church, and other friends and communities around the globe rallied together to pray.

Michael’s health improved. When he awoke from his coma, doctors told him that his turnaround had been dramatic. “I can only attribute that to God responding to the prayers of so many people,” he said.

Despite remarkable progress, he still had lots of recovery work to do, however. “When I first woke up, I could hardly move because of nerve damage. I tried to shift position and fell out of the bed,” he said. The doctors told him that the renal failure meant he would probably have to have kidney dialysis for the rest of his life. They also expected him to need blood transfusions because of the way COVID had affected his blood.

“I never needed a transfusion, and by the time I left hospital, my kidneys were functioning again,” he told us.

The nerve damage has taken longer to heal but doctors expect he will fully recover in two years.

“I feel great now,” he said. “I feel fantastic, because I know where I’ve come from.”

A big challenge was dealing with survivor guilt and grief. While Michael was in ICU, he was unaware that his whole family had been affected by the virus.

After he woke up, his wife began telling him the story, a little each day. “She told me what had happened to me, and how she had been in hospital too.”

The next day, Rachel told him that her mother, who lived with the family, had also contracted COVID. Tragically, she passed away in hospital as a result of the virus.

Then Rachel told him about their teenage daughter. She didn’t catch the virus, but she spent days isolated on her own in the house. She had watched her father, her mother and her grandmother go to hospital, and she had no idea when or if any of them would be coming back.

“I felt so guilty,” Michael said. “I was the one who had brought this disease into our family, and so many tragic things had happened because of it.”

He apologised over and over to his wife, who said, “What is there to say sorry for? We are in a pandemic. You couldn’t control this. There’s nothing to apologise for.”

“Her words lifted a huge weight off my shoulders,” Michael said. “It was truly a demonstration of grace.”

“Her words lifted a huge weight off my shoulders,” Michael said. “It was truly a demonstration of grace.”

As an MST student enrolled in a part time Graduate Diploma in theology, Michael was grateful for MST’s support during his illness. “I deferred the subject I was studying, and the college frequently made contact and made sure I was alright.”

Much later, when Michael was recovered enough to move to a rehab facility, the doctor checked him in, and then came back to see him with a smile on her face. “I just realised that you’re the person I was praying for earlier in the year!” she told him.

Later, she asked him if he’d be willing to speak to the press about his COVID experience.

“There are lots of people who don’t understand the virus,” she explained. “You could help inform the community.”

After discussing it with mentors and praying about it, Michael agreed.

“I think I was in the very first COVID campaign put out by the Victorian government,” he said. That interview led to more requests, and he ended up in a documentary called Cracking COVID which was aired on the ABC.

“I tell interviewers that I hope they are painting a picture of hope and encouragement, because we don’t need any more fear,” Michael said. “My message is that COVID is not the flu, and we need to seek help from the medical community. Don’t just take advice from social media!”