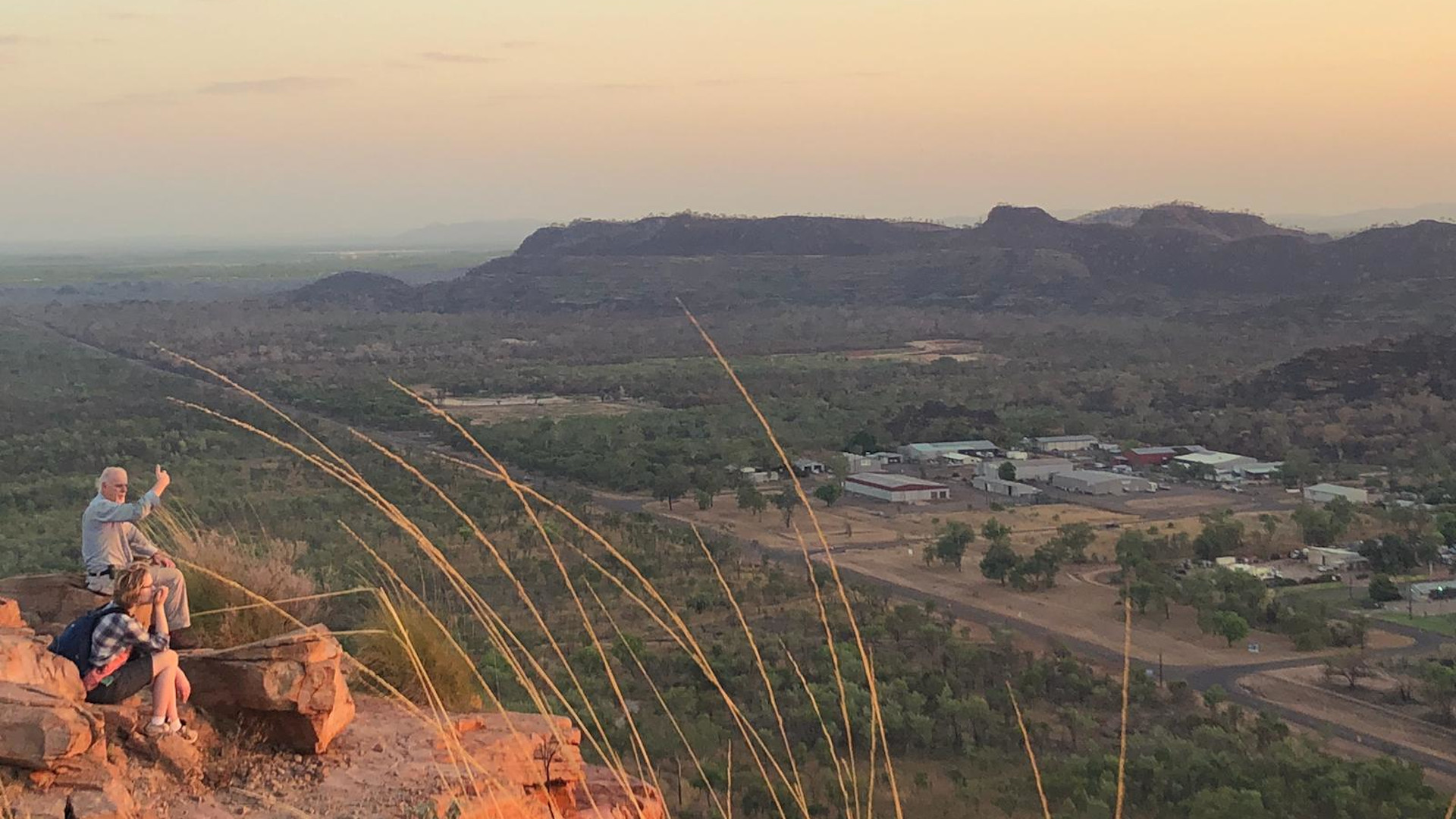 While most of Australia was preparing to support their AFL team at the 2018 Grand Final, the MST Eastern Outbound team began the day by getting up at 4am to climb Kelly’s Lookout, a rocky outcrop that sits 191m above the town of Kununurra, in Australia’s Kimberley region. We were there to watch the spectacle of sunrise in the desert.

As we watched the sun climb over the far-off ridge on the edge of the eastern plains we were captivated by the beauty of the experience, saying nothing, but listening to the words of that beautiful song by Reuben Morgan – Let Us Adore (Hillsong).

When the sun had risen a few degrees, we stopped and prayed for the town and all who serve in the name of the Lord Jesus Christ. There are seven faith communities and the work before these inland missionaries is significant. This remote part of our country takes its toll on those that minister the Gospel. There is so much need. The isolation, the unrelenting heat and humidity, the transient nature of tourism, itinerant workers and the Aboriginal community, makes for a melting pot of humanity.

The team spent most of its time with Living Waters pastors Brett and Val Durant. This aboriginal church ministers to those who come from local and far off indigenous communities where many live in crisis from day to day. Brett and Val taught us that Aboriginal people value three things above all else: Family – Food – Faith (they call it Spirit). As a church Living Waters ministers to the spiritual yearning that resides in all people and is central to indigenous culture. While the team enjoyed a number of ministry opportunities, the evening of our last day, spent in outreach at an Aboriginal community called ‘Garden’, was a fitting end. How wonderful it was to be with our indigenous brothers and sisters in Christ, gathered in a dusty vacant lot, singing praise to God, and calling on their families to leave their lives of alcohol and drugs, and gain purpose and direction through following Jesus Christ.

Having Dr Bernie Power as part of the team was such a blessing to the town. We partnered with another church, The People’s Church, who have a mix of Aboriginal and western people in their congregation. Their pastor, Jamie Short, asked Bernie to give two short seminars on Islam so local Christians could be better equipped to testify to their faith as the spread of Islam reaches their communities. Many from the town came, with around 30 attending each night. We were fascinated to hear that while Islam has not made significant inroads into Aboriginal communities, the softening of the fervour that once marked their Christian faith, has led to many cults now being openly welcomed. In many ways the work to defend and strengthen the Christian faith in Australia’s top-end is only just beginning.

During our time in Kununurra we learnt much about cross-cultural ministry from Reach Beyond (where we stayed), Living Waters church, The People’s Church and Wunan, an Aboriginal development organisation. Each in their own way illuminated the need for all Christians to broaden their view of mission with the knowledge that people all around us are lost, and that our regional, rural and remote communities need workers as the harvest is ready. There is so much to do, and it will only be through God’s strength, perseverance and being attentive to the leading of the Holy Spirit, that progress will be made.

In talking with the leaders of both Living Waters church and Reach Beyond they shared about the critical need for young, committed, theologically equipped Christians to join them in Kununurra so the work can be shared and ultimately passed on to a new generation in this Australian mission field.

Could this be you?

Thank you to Reach Beyond

Outbound Kununurra would not have been possible without the support and assistance of Reach Beyond (formerly HCJB). Reach Beyond is a mission organisation that transmits the Gospel across Asia and the South Pacific in many languages every day from their Kununurra short-wave facility. While the Reach Beyond farm primarily houses massive antenna arrays, it was their recent addition of a school for at-risk Aboriginal teenage girls (called Altar-1) that stole out attention. Altar-1 originated from Perth and have now partnered with Reach Beyond as they use God’s assets for local needs. At present they are also investigating how they can develop the farm as a working property to teach young Aboriginals farming techniques like crop cultivation, raising cattle for sale, working horses, growing mangos and bananas.